According to iata Travel, Camair-co and Air France Airlines will offer flights six days a week between  Paris and Douala

All season, but it depends on each region:

-The entire North: from November to June

-The coastal area, the mountains region (West and North –West) and part of centre: all seasons.

-The forestry zone (south and East): from November to April

– 1 passport currently in use 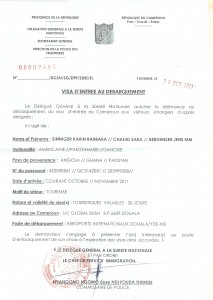 Hepatitis b (travelers from 30-40 years)